Kato was seen at our clinic in August 2018 for a suspect osteosarcoma (OSA) of the left forelimb. A CT scan and bone biopsy was performed at this time. The CT scan noted the previously reported bony lesion in the left forelimb, but also one in the right forelimb.  Although bony spread is rare, it has been reported in OSA.

The bone biopsy of the left forelimb confirmed Kato had an OSA of the left forelimb. In most circumstances, amputation is recommended due to the risk of pathological fractures and local pain. However, given there were bony lesions in both left and right forelimbs this was not possible in Kato’s case.  Another form of local treatment is radiation.  After careful consideration, the family elected to proceed with palliative radiation and in September 2018, Kato made the big trip interstate for a few days. She enjoyed her time interstate and even visited some of the Sydney landmarks! Kato responded well to the radiation with minimal side effects. In October, traditional injectable chemotherapy was commenced to address any distant microscopic spread.  After 3 of these treatments, a follow up CT in December 2018 noted stable local disease and no distant spread! Following this, Kato was commenced on a low dose chemotherapy tablet protocol, once again to target any distant microscopic disease. Kato was loving life, chasing rabbits at home and playing with the family’s new Rottweiler puppy Reva.  In May 2019, Kato became acutely lame during a walk. A repeat CT scan at this time noted a fracture of her right forelimb in an area distant from her originally noted tumour site. Given there was no traumatic event prior to her becoming lame, it is possible that there had been some local microscopic spread of her cancer to this area. Furthermore, there was now also a lesion in the chest suggesting that her OSA had spread distantly.  With these results, the family made the very difficult decision to put beautiful Kato to sleep. Rest in peace dear Kato, you are sorely missed and always remembered. 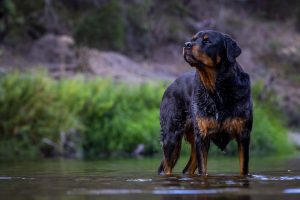